Following my last article, There are Records and then there are Records, I have been contacted by a reader who quite legitimately questioned my rationale behind a statement I made with reference to the birth of Susanna Ford.

The point of concern was the fact that the source upon which I was relying, that is the birth certificate of Susanna Ford, was in fact a ‘collective’ record rather than an ‘individual’ record of Susanna’s birth.  The point being made, how can I assert that such record is correct given the number of years between those who appear on the collective record?  This is a thoughtful question and deserve a considered response particular given the subject matter of the previous article.  Susanna Ford’s birth certificate appears below.

As I have indicated in earlier articles, the best we, as family historians, can do is to utilise the record as presented to us taking account of the vagaries which inevitable appear.  Apart from the fact that the birth certificate is in the ‘collective’ form we might also note that the writing also appears to have been penned by the same hand.  Given the date range from 1826 to 1834 one may readily conclude that the record keeping was not contemporaneous with events.  In other words, it is a record of other individual records. Does such distinction matter?  Let’s see.

Below is my construction of the Wright family tree.  Margaret Wright married Samuel Ford the parents of Susanna Ford and nine other children.  Of interest to this discussion are the four children born to Robert Wright, namely William born 1787, Alexander born 1789, Margaret born 1792, Janet born 1794, and Robert born 1796. 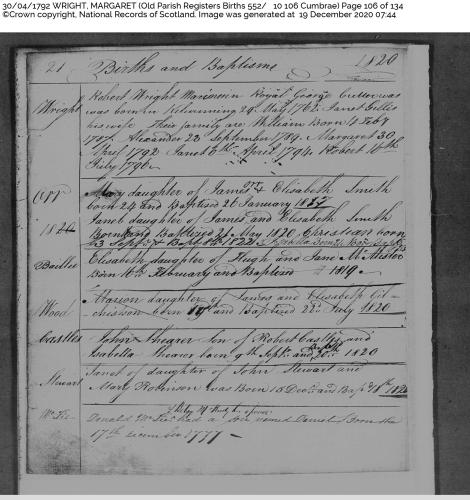 Margaret Wright’s birth is in the collective form where she is located in the correct chronological order with respect to her siblings.

The salient point regarding this discussion is that the collective record is not, by the mere fact of being a collective record, any less reliable than the individual record.  Further, these records are achieved under the National Records of Scottish which essentially gives them legal status.

With respect to Susanna Ford’s birth record, we can make some assessment. While her birth record is in the collective form it nevertheless, without other contradictory evidence, is good as a record can get.  This aspect is confirmed when I ordered the offical birth certificate for James Ford, the youngest of the ten children born to Samuel Ford and Margaret Wright.  His record is essentially the same as Susanna Ford which clearly notes that the siblings where born in the Parish of the Cumbraes in the County of Bute. 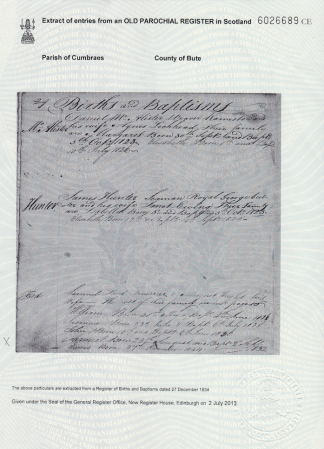 Given the above, the record that was forwarded to me records that Susanna Ford was born at Largs. This information has to be questioned for a number of reasons.

There is no evidence forthcoming which suggests that Susanna Ford’s siblings were born anywhere other than on Cumbrae.

The 1841 Scottish Census lists four surgeons (medical practitioners) and three midwives on Cumbrae which would indicate that there was no reason for women to leave the island to give birth.

Further, the city of Largs is located in Ayrshire and not Buteshire which does not create confidence in the accuracy of this particular record.

It is worth recapping on the principals under which genealogists and family historians operate.

The exhaustive nature of the material presented,

That the data has been adequately analysed,

That conflicts and errors have been acknowledged then resolved or explained,

Sources have been cited and if not reasons provided, and The conclusions reached are reasonable.

That living relatives are not included in the public domain.

Adhering to these principles will ensure that one arrives at a reasonable conclusion.  After all, after analysing the data and examining the material, explaining contradictions and citing sources, one must make some decision as to the matter in hand.  That is not to say that such conclusion is somehow a certainty.  Subsequent material may well undo much work. But then that is the nature of family history.  There is alway the possibility of encountering the unexpected.